"Progress in the World of Fantasy" Performance, 9/9/14 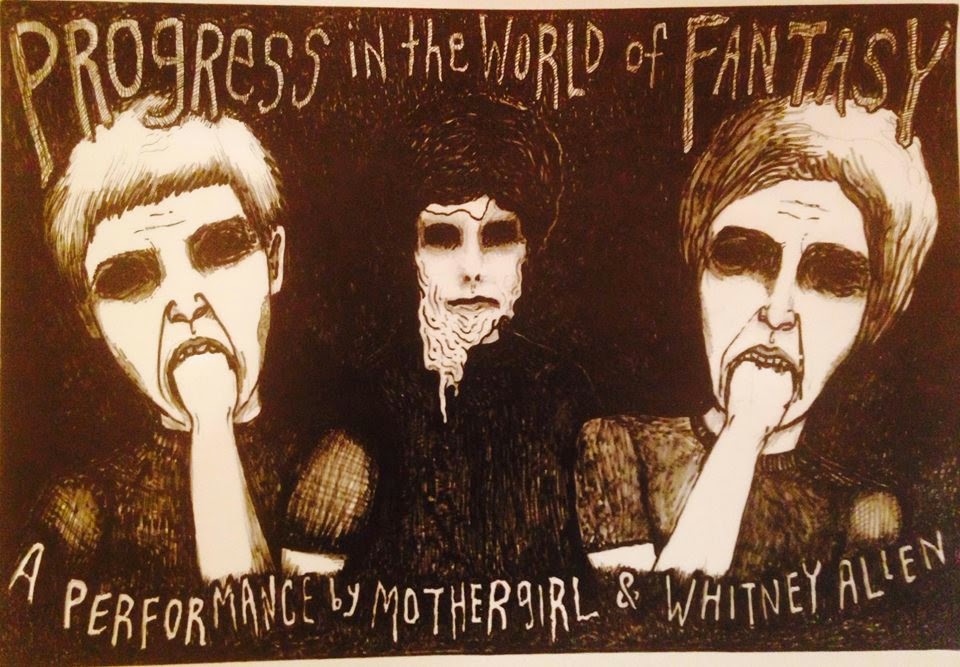 Progress in the World of Fantasy
Mothergirl and Whitney Allen


Progress in the World of Fantasy is an experimental performance and music piece addressing notions of projected desire and the female performing body. Viewers are initiated into an environment wedged between pleasure and revulsion -- a landscape of desire, object worship, bodily mess, and song.

This single night performance begins at 7pm on Tuesday, September 9 and will run for approximately 40 minutes. A Q&A will follow. Progress in the World of Fantasy is one stop along Mothergirl and Whitney Allen’s performance tour. A full schedule of performance can be browsed on the facebook event page: https://www.facebook.com/events/753860418011110/.

This performance will feature some strong and explicit imagery.​

Mothergirl (Katy Albert and Sophia Hamilton) is a Chicago based performance duo whose work has taken the form of installation, durational event, and guided audience interaction. Mothergirl’s characters, and the worlds they inhabit, exhibit a strategically refracted or misrepresented view of current political and philosophical discourse, creating a space where viewers are asked to think critically about their own relationships with feminism, consumerism, and representational visuality.

Whitney Allen is a vocalist and multi-instrumentalist, active in the Chicago and national DIY community.  She currently performs with the post-punk band Toupee and experimental duo Columba Fasciata. Allen and collaborators challenge their audiences to reconcile intrigue and repulsion by pushing the boundaries of sound.

Lease Agreement is a collaborative curatorial project by artists Adam Farcus and Allison Yasukawa. Set in the living room of the couple’s rental house, Lease Agreement continues in the tradition of apartment gallery exhibition spaces by exhibiting conceptually rigorous, engaging work within the context of a home.
Posted by Adam Farcus at 8/30/2014 05:08:00 PM