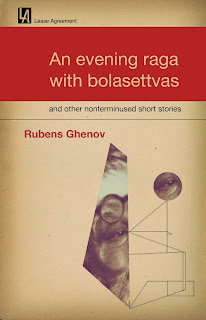 An evening raga with bolasettvas and other nonterminused short stories features an installation of painting and sculpture by Philadelphia based artist, Rubens Ghenov. Foregrounded in a lyrical literary impulse Ghenov’s sources form, content, and atmosphere from research including the film The Music Room and Indian classical music. The diverse origins of this reference material meet, sometimes cordially, other times in collision. In order to negotiate these intersections, Ghenov acts as both artist and author as he works as though in concert with the ghosted voice of a fictional creator. The resulting works obscure the conceptual process of their making: their presence, it would seem, have erased the process from which they were produced leaving viewers aware of a trace of something utterly specific and somehow familiar, yet decidedly unknowable.

The reception for An evening raga with bolasettvas and other nonterminused short stories will be held on Friday, October 11, from 6:00pm to 9:00pm at Lease Agreement, 3718 Ellerslie Ave, Baltimore, Maryland. The exhibition runs from October 11 to November 10. Gallery hours are Wednesdays from 4pm until 8pm and by appointment. To request an appointment, please contact the gallery at leaseagreementbaltimore@gmail.com.

Rubens Ghenov was born in São Paulo, Brazil and currently works in Philadelphia. He received his BFA at Tyler School of Art and his MFA from RISD, both in painting. He has exhibited at the Woodmere Art Museum, Philadelphia; Gelman Gallery, Providence; Alogon Gallery, Chicago; and most recently TSA Brooklyn.