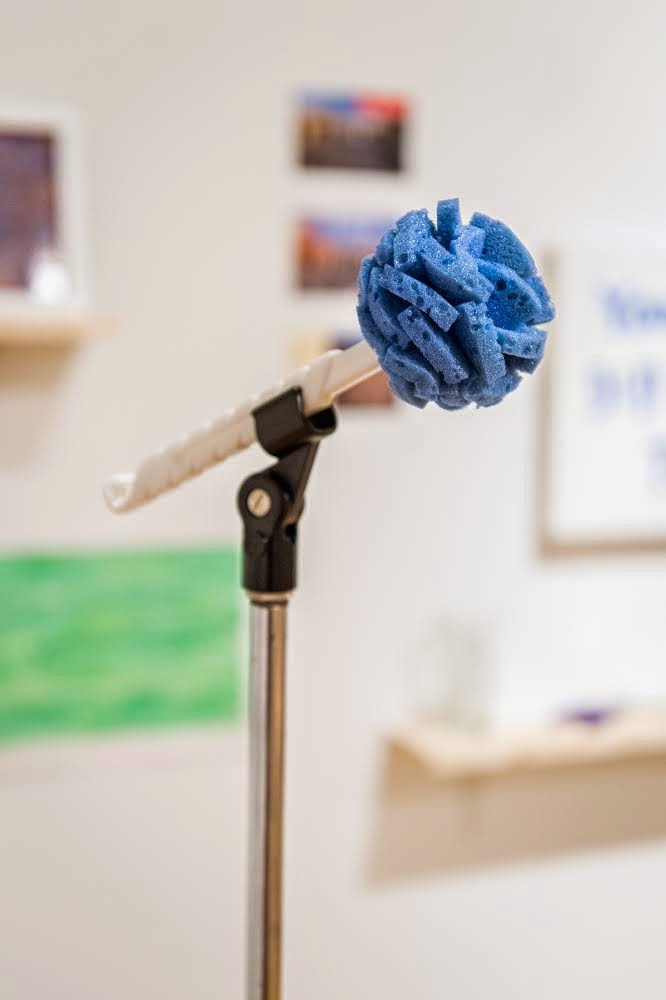 In order to make a one-liner, one must first invent the universe.


Somewhere in the imaginary space between conceptual sculpture and novelty gag items, Malmed’s occasional objects are a little life-like: they’re funny and smart and dumb and sometimes sad and do as much revealing as concealing. Past iterations have included a ciabatta floating over a bust of Beethoven (Chuck Berry Breakfast), a microphone hanging out a fifth story window almost at the ground projecting the din of the city (Word on the Street) and an unread bootleg course reader for Joseph Grigely’s Exhibition Prosthetics class used as a small plinth (Unread Bootleg Course Reader for Joseph Grigely's Exhibition Prosthetics Class). The installations are manic in their presentation, like a junk shop of floating signifiers. There are always new works and ones that move from one place to the next, reconfigured and recontextualized. Like scanning the home-construction/DIY bookshelf at the used hardware store and coming upon David Robbins or a receipt for something you haven’t bought yet, the exhibition checklist functions as a table of contentment, a take-away with fraught enjambments, an all-word Where’s Waldo for the meaning set. The references bounce between poetry and contemporary art and clichés and music and an object oriented ontology in which the thing has just learned that no-thing lasts forever. Sometimes they are poetry, mostly they are contemporary art, a few are clichés, almost none are music and almost everything understands its presence is fleeting.

Jesse Malmed is an artist and curator working in video, performance, text, occasional objects and their gaps and overlaps. He has performed, screened and exhibited at museums, microcinemas, film festivals, galleries, bars and barns, including the Museum of Contemporary Art Chicago, Museum of Contemporary Photography, the Portland Art Museum’s Northwest Film Center, Light Industry, the Shanghai Biennial, Crossroads, Milwaukee Underground Film Festival and Chicago Underground Film Festival. In addition to his own work, Jesse programs at the Nightingale Cinema, co-directs the mobile exhibition space and artist bumper sticker project Trunk Show and has programmed work in a wide variety of contexts individually, as a member of Cinema Project and as the peripatetic Deep Leap Microcinema. His writing has appeared in Incite Journal, YA5, OMNI Reboot, Big Big Wednesday, Temporary Art Review, Bad at Sports and Cine-File. A native of Santa Fe, Jesse earned his BA at Bard College and his MFA at the University of Illinois at Chicago. He was named a “2014 Breakout Artist” by Newcity and is a 2014-15 Artistic Associate at Links Hall. He lives in Chicago. www.jessemalmed.net

This exhibition is the third of three for the 2013-2014 season that Lease Agreement will host as partner gallery with the artist residency, ACRE. ACRE (Artists’ Cooperative Residency and Exhibitions) is a volunteer-run non-profit based in Chicago devoted to employing various systems of support for emerging artists and to creating a generative community of cultural producers. ACRE investigates and institutes models designed to help artists develop, present, and discuss their practices by providing forums for idea exchange, interdisciplinary collaboration, and experimental projects. More information about ACRE can be found at www.acreresidency.org.


Lease Agreement is a collaborative curatorial project by artists Adam Farcus and Allison Yasukawa. Set in the living room of the couple’s rental house, Lease Agreement continues in the tradition of apartment gallery exhibition spaces by exhibiting conceptually rigorous, engaging work within the context of a home.
Posted by Adam Farcus at 11/02/2014 09:42:00 PM