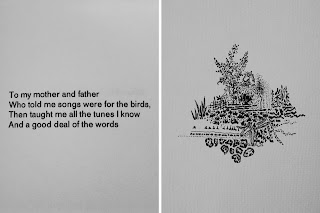 In his often sparsely composed series of contour line ink drawings, Is As (2008-2013), Mao depicts
landscape scenes, portraits of friends and students, and abstracted genitalia. His works are culled
from lived experiences that he translates into gestural form in order to give voice to that which is
fleeting and magical.

Houlihan's work is at once intimate and conceptually-grounded. Taking the form of sculpture, book,
and video, these works draw out the poetry in everyday objects, actions, and language by altering,
ever so slightly, the meanings they connote. The results shift these ordinary signs, re-presenting them
as totems to those who are near and dear.

The reception for Special Soft Sudden will be held on Saturday, December 14, from 6:00pm to
9:00pm at Lease Agreement, 3718 Ellerslie Ave, Baltimore, Maryland. The exhibition runs from
December 14 to 22. Gallery hours are by appointment and can be requested by contacting Lease
Agreement at leaseagreementbaltimore@gmail.com.

Kasia Houlihan is a Chicago-based artist who works in a variety of media in an effort to get at the
experience of relating. With photography, drawing, video, sculpture and language all in her arsenal,
she chips away at the concepts of closeness, communication and connectivity. She has exhibited at
such venues as EXPO Chicago, Gallery 400, Chicago; Museum of Contemporary Art, North Miami;
Echo Park Film Center, Los Angeles; and the de la Cruz Collection Contemporary Art Space, Miami.
Houlihan received an MFA from the University of Illinois Chicago.

Xiaoguang Mao was born in China and currently works in Beijing. He received his BFA in fine arts
from Jiangxi Normal University and his MFA from Renmin University, both in China In addition, Mao
was recently a guest artist at the Maryland Institute College of Art. He has exhibited internationally at
institutions including the Louvre Museum, Paris; New Millennium Gallery of 798 Art Zone, Beijing; Art
Museum, Central Academy of Fine Arts, Beijing; and Sunshine International Art Museum, Beijing.

More of Houlihan and Mao's works can be seen at their websites, cargocollective.com/kasiahoulihan/
(Kasia Houlihan) and artist.mxg.zhuokearts.com/ (Xiaoguang Mao).
Posted by Adam Farcus at 12/08/2013 10:03:00 PM